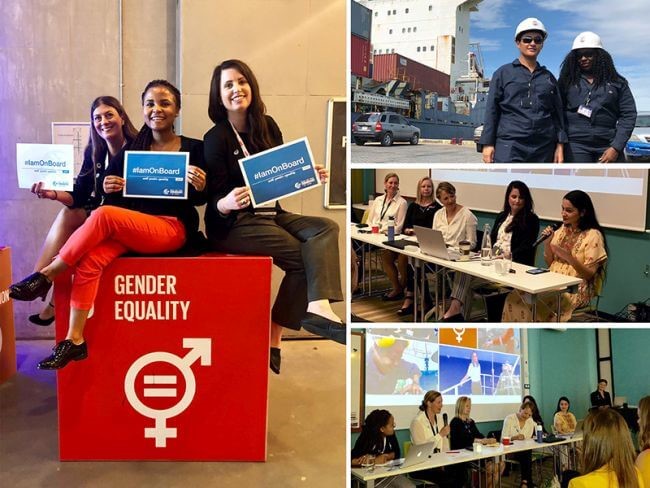 In a year when promoting and empowering women is a dominant theme throughout the maritime community, IMO hosted a special event at the Nor-Shipping exhibition (6 June) to highlight the some of the challenges – and the solutions – around encouraging women to take up seafaring roles.

An all-female panel of experts, with many years’ combined seagoing experience, spoke of some of the issues they have faced and which still need to be tackled. Many were simple yet vital things. One panellist spoke of the absence of sanitary products on board (despite shaving equipment being readily available) or a means to dispose of them. Another mentioned the real threat of sexual harassment and even assault. Another said she had experienced a stream of belittling comments from fellow crew members and felt a continual need to prove herself.

But the overall tone was positive, with a strong feeling that a new generation of both male and female seafarers were no longer finding women at sea so surprising or difficult to cope with. There was a clear view that more female role models and mentors, as well as females in senior positions, were needed but these were coming through with the generational shift.

All the panellists spoke in inspirational terms about the rewards of a maritime career and praised the many networking and mentoring organisations now established for women in maritime. IMO itself has a long-standing gender equality programme and has helped establish seven regional associations for women in the maritime industries.

Earlier during Nor-Shipping, IMO’s gender equality programme manager Helen Buni launched a new project with WISTA International to measure exactly how many women are working in the maritime industry. Encouraging more women into shipping is widely seen not only as desirable in its own right but also a vital source of labour for an industry frequently predicting human-resource shortfalls in the years to come.

This year, IMO’s theme for World Maritime Day is “Empowering Women in the Maritime Community” and this is echoed in the 2019 Day of the Seafarer campaign which will ask maritime professionals regardless of gender to say “I Am On Board” with gender equality at sea.


Company presentation
How can we help you?